I recall when we received confirmation that our daughter Adina’s struggles were due to Autism. We were told that we had to manage expectations about her likely limited ability to function independently.

Call it wishful thinking, but I refused to believe it. I saw how she had already defied the odds when we were told at 7 months that her cataracts made her legally blind; even before corrective surgery she was reading at age 3. Her mother, Bonnie, and I were determined to not only give her every opportunity to succeed, but to push her to overcome obstacles. It was a struggle at times, and I regret when my own emotional insecurity and anger got in the way of productive parenting, but I believed that, with the right coaching and support, Adina could succeed. 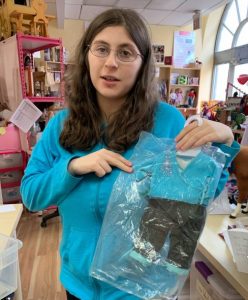 Adina prepares doll outfit, that happens to match hers.

Adina graduated from High School in June 2018 but decided she was not ready to go to college. We found Yes She Can and Adina enrolled in their job skills development program in September 2018.

Yes She Can has made a huge impact on Adina. After a few months in the program – and faster than we believed possible – she was successfully navigating public transit on her own: and that is taking an express bus from New Jersey to the Port Authority Bus Terminal, a subway to Grand Central Terminal, Metro North to White Plains, and walking to the store. 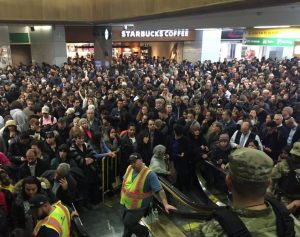 Only the second time she did this commute on her own, a crippling snowstorm shut down all transportation in the region and made the normally chaotic Port Authority Bus Terminal resemble the insanely overcrowded train stations in Asia.

Changes in routine are very stressful for Adina, but when she called me, she exuded calm and self-control. We talked through the options and ultimately came up with a plan. I was and am so proud of how she handled a very difficult situation.

She continues to make this commute on her own twice a week and is talking about traveling on her own to visit her sister in Boston. This from someone who when she first started would not have dreamed of going to Manhattan or even nearby Fort Lee on her own to visit a friend (which she does now without a second thought). 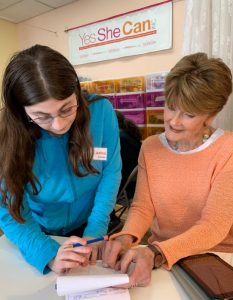 Coach Pat Rowan working with Adina on a customer transaction.

Adina has gained invaluable interpersonal skills and learned to use bookkeeping software,  but most of all, she is far more self-reliant and able to see that she is capable of independence. Her inner strength has always been there; Yes She Can has nurtured it, in an environment that is supportive and understanding, while giving real work skills that she can apply to jobs in many industries.

The program has given her a foundation for continued future growth and we are grateful to all those whose energy, dedication, and funding help make it possible

Yes She Can Inc., a non-profit founded in 2013, is dedicated to helping young women with autism and related disabilities develop transferable job skills and workplace social skills – through authentic work experience.  We serve teen girls in transition from high school to adulthood and young women with autism spectrum disorders in an inclusion setting at Girl AGain boutique. END_OF_DOCUMENT_TOKEN_TO_BE_REPLACED