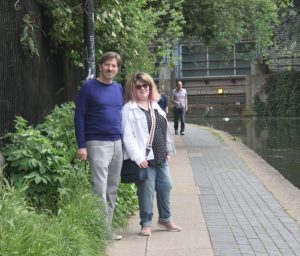 I recently got back home from a ten day trip to London with my immediate family.

Some of you might be aware that I suffer from social anxiety. While it has greatly improved since my autism diagnosis, it still pops up now and again. So while preparing for my trip, I was concerned about how I would feel. You could say I was anxious about being anxious!

This wasn’t my first trip overseas, however, I went to London once before, in high school, for a family trip, so the area wasn’t completely foreign to me. But that was before I was diagnosed, and how that affected me was small, but significant.

Being overwhelmed, the huge crowds and the transportation system being confusing were all things I struggled with before. When I get overwhelmed, it feels claustrophobic, like being in a small room that’s getting smaller the more overwhelmed I felt. It was a catch-22, The more overwhelmed I was, the more anxious I became. Also feeling ‘left behind’  was, and sort of still is a problem with me.

In New York City, I’ve often felt ‘left behind’ by the denizens. It’s a difficult feeling to describe, but the simplest way I can put is that I feel that I’m holding people up, even if I’m not. So that was a concern. Another thing I struggled with during the previous trip was talking to people. People would talk to me, and I couldn’t talk that well, even struggling to look them in the eye. Nowadays, I’m much better at talking to people, I’d like to think. 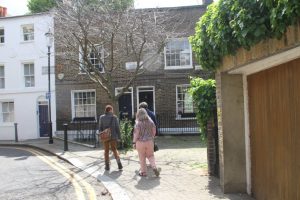 There was a bit of hope, as last time I felt very comfortable, as in I felt like I could walk to the store on the end of the street we stayed at, and buy something. That was a rarity for me back then, so that was something to note.

So the day came, and 6 hours later, we were in London. One of the things I was worried about was Customs. But that was no worry, as Heathrow Airport had automated the entire process. You just went up to a kiosk, scanned your passport and took a picture! I did cause a little hold-up, as you were supposed to take off your glasses, and I didn’t. Opps!  Also, a thing about me, is if people around me are nervous, I get anxious. So the fact that my family took this new automated kiosk custom thing in stride really helped.

Another thing that helped was just that I was older. Last time I was 17 and in high school, now I am  22, and have a job. So the fact I matured was a big step forward. As I’ve talked about on this blog before, I’m on medication for my anxiety. That definitely helped me get to a place where I can work on my anxiety. So the big crowds weren’t as a big deal as last time.

People who know me can tell you that I’m a slow walker, mostly due to my cerebral palsy. So when walking with a group of people, I often fall behind. Not a big deal in suburbia, but in a big city like London, it can be anxiety inducing. But, I consoled myself be realizing that I knew where we were going and could keep an eye on at least one of my family, I could ‘keep up’ in my own way! (side note, a huge thank you to my brother for dying his hair bright red, that really helped!)

Another thing I was worried about is how awkward I can be. As mentioned before, I have cerebral palsy, so I trip, drop things, and bump into things often. It also doesn’t hurt that I’m just plain clumsy. This causes me to feel that everyone is staring at me, and judging me. What helped is to realize is no one cares. Everyone else is so wrapped up in their own business, (often worrying if they look silly to everyone else)  that they don’t care. Also, from personal experience, if you think someone is staring at you, 9 times out of 10, they were staring into space and didn’t realize they were staring at a human being. (If I’ve done this to you, I’m sorry!)

One thing that helped me was realizing that London and New York are completely different cities, with their own ‘feeling’ as it were. New York is very fast pace, with new stuff happening every second. London is slower paced, still fast as it is one of the ‘hubs’ of the world, but much slower than New York.So that helped. 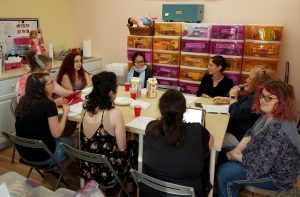 Mackenzie (far right) participating in a Yes She Can team meeting.

Working at Girl AGain boutique definitely helped. The greeting of customers, in particular. Talking to the customers helped my social anxiety a lot, having to talk to people is the first step in getting used to talking to people. (before I thought I was an introvert, but now I think I am an ambivert.)

Without my experience at Girl AGain, I wouldn’t have fallen in love with London. In fact, I want to move there in the future! With the skills I learned through Yes She Can’s program, I know I can get a job and move to my dream city!

A lot of my mom’s friends, when they found out I had anxiety, they didn’t believe that I did.  “She’s too friendly and open.” They said. What they didn’t know was how much effort it took to appear that way. It was exhausting fighting your own body’s instinct to, well, basically flee the current situation, or melt into the floor (Trust me if I had the physical ability to do so, I would have. Multiple times.)

Having that gone is like you can be yourself. Anxiety is not who you are. Social Anxiety is a force that wants you to stay wrapped up in its grasp. It is hard to break free, terrifying to do even, but once you do, your life truly opens up. And while it might come back sometimes, you’ll always have the tools to free yourself. 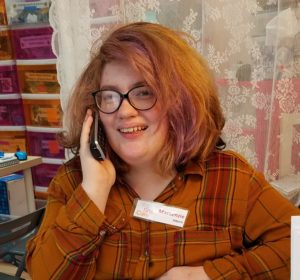 Mackenzie has been a Yes She Can trainee for two years, progressively improving on her skills including interacting with customers in the store and on the phone.

She wrote about this in a post a year and a half ago.  Overcoming phone fear.

Yes She Can Inc., a non-profit founded in 2013, is dedicated to helping young women with autism and related disabilities develop transferable job skills and workplace social skills – through authentic work experience.  We serve teen girls in transition from high school to adulthood and young women with autism spectrum disorders in an inclusion setting at Girl AGain boutique. END_OF_DOCUMENT_TOKEN_TO_BE_REPLACED