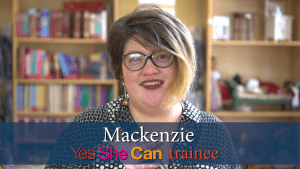 Because of the exposure to the LGBTQ+* community, people are aware of the idea of ‘coming out’ or revealing to others that you are who you are, and that it differs from the norm. Coming out is a nerve racking experience, as the person who opens up is never sure if people they love and care for will accept them. Sometimes having the discussion can be devastating, losing family members and friends, or even dangerous, if you are not accepted. That is why acceptance is so important. Coming out is mostly used to inform people of their sexual orientation or different gender. However, sometimes you have to come out in a different way. Sometimes you have to come out as autistic, and acceptance there is just as important.

Let me introduce myself; my name is Mackenzie, I’m 23. To make a complicated story short, I was born a preemie and was diagnosed with cerebral palsy. I got a diagnosis of autism at 19, and I have to admit, I cried because, for the first time in my life I understood who I am and had hope that I could get help for myself. I tell you this, to explain that while I have been autistic my entire life, I didn’t know it. So, I had to come out as a person with autism to my family. And their response made all the difference.

My grandparents on my Mom’s side were one of the first to be told. Both of them were some of the most accepting people on the planet, but I was still worried as all of my family were highly successful people who went to college, had great jobs, and all that. I was afraid, since I had autism and didn’t finish college, they would be disappointed in me. That couldn’t be further from the truth as I later found out.

My grandma was in rehab after an illness, and I went to visit her with my family. Just by luck, I had my name tag from Yes She Can with me. She often said how cool it was that I worked here, and how great it was, so I showed her the name tag, and she went on and on about how proud she was and how she was telling everyone she could about me and proud she was. She also kinda overstated my actual position in Girl AGain (I’m 99% sure there is someone in Delaware who believes I run Girl AGain.) Sadly, that was the last time I saw my grandma, as she died a few weeks later. I am very happy to have that moment with her, and grateful that was our last time together was so lovely. I feel at peace knowing that they not only understood my autism, but they accepted it and were proud of me.

I am the older child in my family. My brother is three years younger than me, but we are close, we can tell each other everything. When he was younger, he’d try to copy me and do what I did. So I felt like I had to set an example and be the best older sister I could be. As we grew up, however due to my anxiety, getting overwhelmed and other factors, my brother became the more mature one, at least in certain aspects. He would be the one to answer the door and the phone, talk to shopkeepers, and the like.

Eventually he went away to college and went to live on his own, leaving me to still live with our parents. I was afraid he’d stop seeing me as his ‘big’ sister and start looking down on me. Those fears were where laid to rest when my brother, on break from college, told me that he talks about me to his friends all the time and about a project he had to do. The project was with photos, and he turned his photos into tarot cards. He used pictures of his friends, himself, and me. The card he put me on was the chariot. For those who don’t know tarot cards, the chariot card means overcoming conflicts and moving forward in a positive direction. Its keywords are ones of willpower, drive and courage.

He told me that he looked up to me, that I was one of the strongest people he knew. Hearing those words felt like I was strong, that I was doing the right thing. Having my little brother believe in me, it was a weight off my shoulders I didn’t know I was carrying around.

As I hopefully demonstrated in this blog, acceptance is important. In the beginning, understanding that some people have challenges that others don’t, and not only accepting that, but being supportive and proud is the best thing in the world for people like me. Whether our challenges are visible or not, people understanding them and being proud of not only overcoming them, but of us as people. That is what makes all the difference.

I compared revealing that I am autistic to coming out as LGBTQ+. Sometimes it does feel like that, sometimes in coming out, people are rejected. Being told that you are wrong, or broken and need to be fixed when it is another, really hurts. What I’m getting at is that if you treat someone as ‘broken”, it can damage them.

While no one close to me has done this to me, I put the pressure of needing to follow the ‘normal’ path of turning eighteen, going off to college, moving out and getting a job, on myself. When I failed to follow that path, it hurt, like I wasn’t doing life right. But realizing that people who cared and loved me believed in me, understood that my path would be different, and was proud that I was not only following my own path, but excelling at it. It made me realize that even though the path I follow is different to what I expected, it is a path I love and want to continue. While it isn’t the normal path, it’s my path, and with the support of those around me, I can accept that this me is the real me.

By Mackenzie H., Yes She Can trainee

Yes She Can Inc., a non-profit founded in 2013, is dedicated to helping young women with autism and related disabilities develop transferable job skills and workplace social skills – through authentic work experience.  We serve teen girls in transition from high school to adulthood and young women with autism spectrum disorders in an inclusion setting at Girl AGain boutique. END_OF_DOCUMENT_TOKEN_TO_BE_REPLACED