I started training at Girl AGain on July 9, 2018. When I first started, I was a little nervous, but now I feel confident working here. I feel more confident because I’ve been learning a lot of things since I first came to Girl AGain. 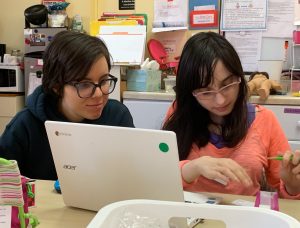 The things I’ve been working on are entering inventory data, sending emails to people who want American Girl stuff, documenting donations, pricing items, cleaning furniture and dolls, greeting people, dusting shelves and swiffing. My favorite job is dusting shelves and my least favorite job is talking to people on the phone who I don’t know, and tying hang tags on the dolls. Sometimes I have a little trouble even though sometimes it’s not so hard to do it. I also have trouble tying the strings when I put it in the hole on the accessory bag  that goes with an outfit.

I had a job at the Yes She Can Advocates for Adults with Autism Awards breakfast in March of this year. I volunteered to hand out tote bags to the people who were attending the breakfast. It was an easy job. 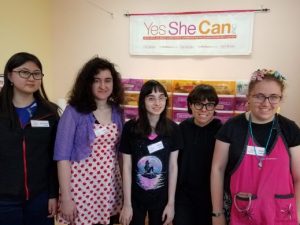 At Girl AGain, I have  worked with different coaches and trainees.  I worked with  Alyssa, a social work graduate student, on Tuesdays and helped Becca sometimes depending on the job she’s doing. I work with Caroline, also a grad student, on Thursdays and I work with Kelli, a mentor, on Fridays.

I still need to practice talking to people on the phone. I’ve been working on tying tickets and I did a good job on it. I’ve been organizing the books and it wasn’t so hard doing it. I’ve been changing the stickers on the books because they were the wrong color. It’s important they’re the right color because it will change the price.

The skills I’ve been working on are having a positive attitude and trying new tasks even if it’s hard. I’ll be learning how to do transactions. It could be scary learning how to do new things, but if I keep practicing, then it won’t be scary anymore.

Last year at school, I went to a preschool classroom at the Westchester Jewish Center in Larchmont and helped out there. Being at Girl AGain has helped me with my confidence. Someday in the future, I would like to be a preschool teacher or a assistant. 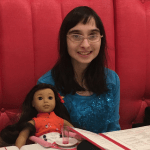 By Mara Glener, Yes She Can Trainee

Yes She Can Inc., a non-profit founded in 2013, is dedicated to helping young women with autism and related disabilities develop transferable job skills and workplace social skills – through authentic work experience.  We serve teen girls in transition from high school to adulthood and young women with autism spectrum disorders in an inclusion setting at Girl AGain boutique. END_OF_DOCUMENT_TOKEN_TO_BE_REPLACED